The race was a record-setting one, as the overall leader completed 808 laps and the GT Class leader also set a new record for completed distance.

The four racers were backed by a squad of professionals—not professional race team members— but instead, professionals who live and breathe all things automotive and get the opportunity to take that passion to work every day in their regular jobs at Honda.

Making HART unlike any other team on the grid, it is that same passion that also drives them to dedicate their free time to team up and race what they make. In this case, it is the Acura NSX GT3.

The team knew that the step up to IMSA WeatherTech was a big one, but was undaunted by the challenge as it looked to build on a long history of success in IMSA including 16 wins in the Continental Tire SportsCar Challenge championship. 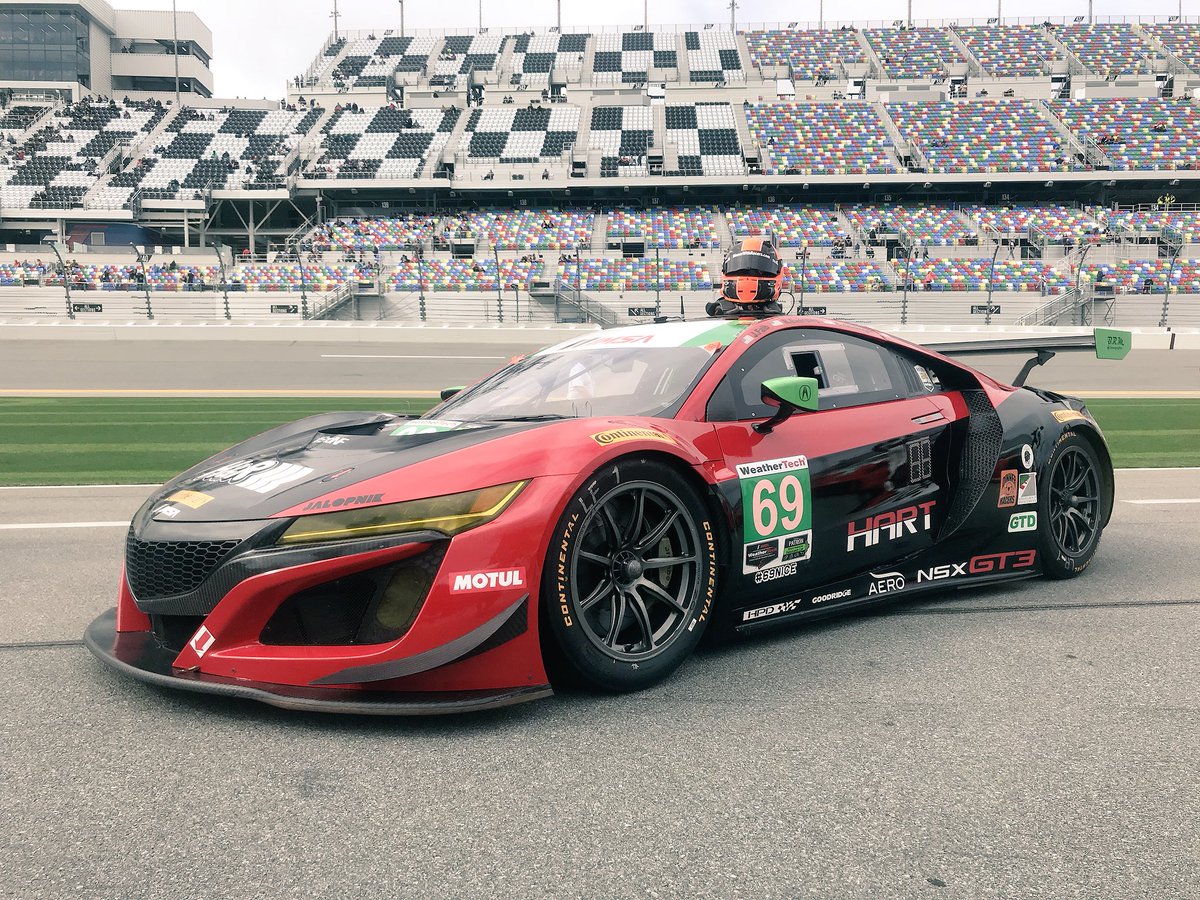 Months of preparation, most of which took place before or after hours at the office, saw the team arrive at the 56th running of the Rolex 24 prepared and ready to go. The team showed pace in qualifying and secured the 15th spot on the grid.

Once the race got underway, experienced NSX GT3 pilot Eversley was on the gas, racing his way to 4th in the order before turning the car over to Gilsinger, who was making his IMSA WeatherTech debut.

“The best part about [the opening stint] for me is that we showed when everything is brand-new, everybody had new tires, brakes and everything, the HART car was good enough to run in the top-five, in what I think is the toughest GTD field on the planet right now – easily one of the biggest races in the world,” said Eversley. “Hats off to this crew. For not even having this racecar two months ago, to now running with the best teams that have ever run in this championship is pretty awesome.”

There were no discernible nerves about the task for the Honda employee, as Gilsinger’s stint saw him race forward from 11th up to run as high as third.

Rayhall was the next to take over as the race established its flat-out pace and long green flag runs. Logging the laps as the day started to move to night, Rayhall raced as high as fifth and kept the HART entry in the top ten before turning the car over to Falb.

While thunderstorms were very much anticipated for Sunday, few had been expecting the sudden and severe rains that enveloped the circuit as Falb was handed the keys to the No. 69.

Despite having very few laps on board a GT class machine, and even fewer—none, in fact—behind the wheel of the Acura NSX GT3 in rain conditions, Falb continued to reveal his championship winning credentials with a stout stint through rapidly changing conditions to never put a wheel wrong and keep the car in top ten contention.

The foursome continued to swap seats through their rotations, shrugging off the occasional on-track too-close encounters in traffic to keep logging the laps and focus on the finish. 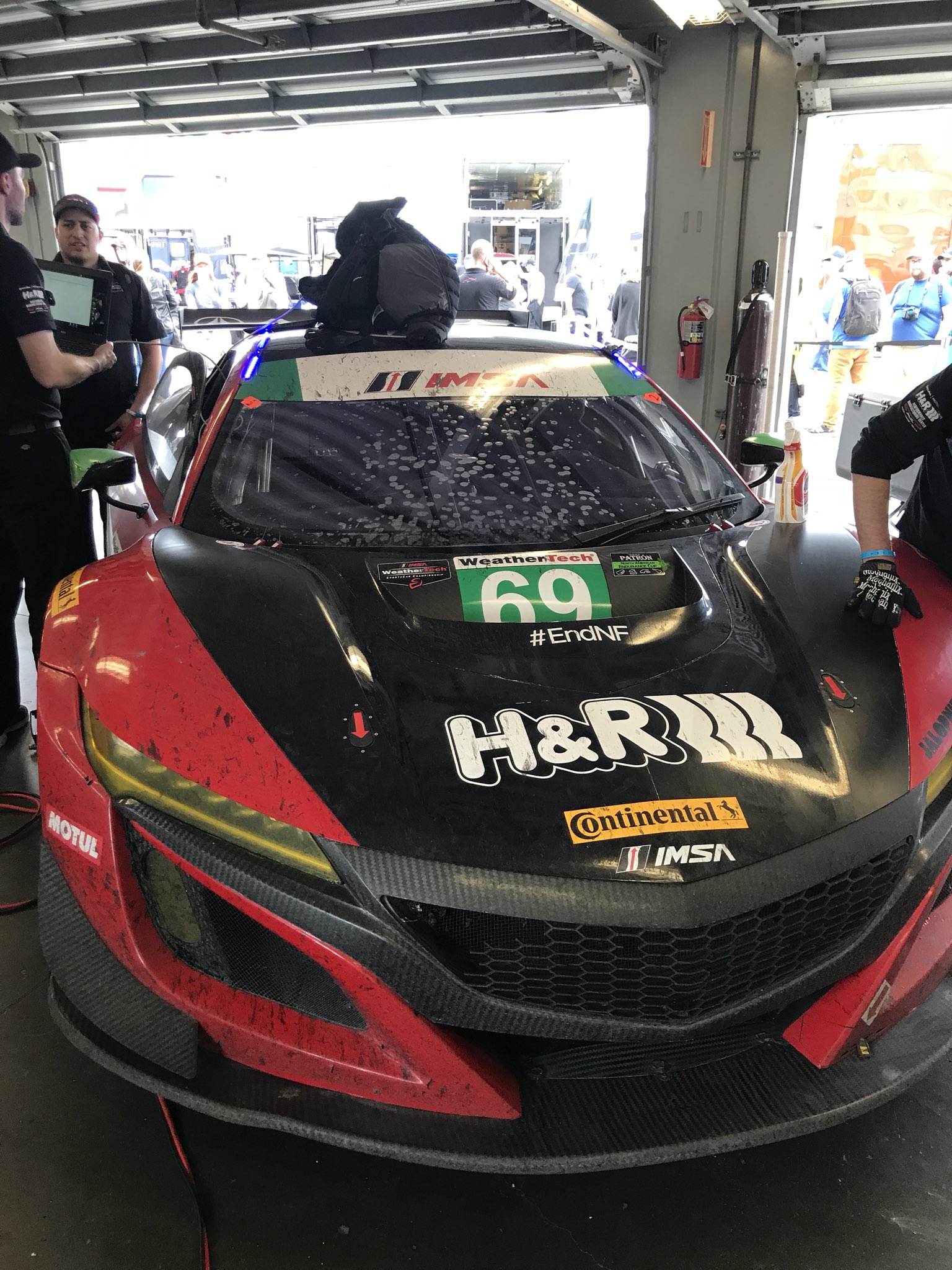 Racing is partially designed to discover weakness, and the team effort suffered a key setback with Rayhall on board some 500 laps into the race as a shock went bad, potentially as a result of contact earlier in the race. Quick work from the team for a big, big, task saw the team make the necessary repairs but still lose nearly 15 laps to the leader while behind the wall.

“It was a bit scary when the shock went, but we were lucky that it happened in a safe area of the track,” said Rayhall, who left the track after the race to bring back the entire crew a well-earned Taco Bell dinner. “We were able to get back to the pits, and I’m proud of the HART guys for fixing everything so quickly. No one gave up, and we all worked  to make it all 24 hours. We wanted to finish this thing, and we did so it feels good to get to the end with these guys. Some things came up and bit us, but that's racing. I’m so impressed by this team.”

“That stint was the hardest, but I’m very, very happy I made it through,” said Gilsinger after his final run behind the wheel. “The temperatures were a lot hotter. I didn’t have a drink bottle and the helmet blower didn’t work - there was a lot of debris stuck in it.  But now, I can relax! I’m happy for the opportunity, but more importantly, everybody on this team has done an amazing job. Yeah, we’ve had a little bit of bad luck here and there, but nobody has been upset, no one has freaked out and everyone has kept positive. We kept ticking, and were able to bring it home, so I’m really proud of everybody.”

“I feel really good,” said Falb. “I was feeling a lot better the first few hours of the race. After we cycled through all of the drivers, we were definitely in contention to win. Overnight, we then had a couple of mechanical things that popped up that put us several laps back, but, honestly, these guys haven’t missed a beat. Everyone did their job, and I'm excited to be here. It feels good.”

Undeterred after being relegated to the second page of the timing screens, the team continued to press forward and log all laps on offer as the race ran at a flat out pace. Making sure to protect the car to make it to the finish, the drivers rallied to bring the No. 69 home in one piece and complete the race after completing 2,559 miles of hard fought racing.

“I knew we were pretty far down (the order), but I still wanted to go out there and get these guys something to cheer for,” said Eversley of his late race stint. “I basically went as hard as I did at the start of the race and ran with the leaders – in fact, we held the leaders off for two stints, which is pretty cool, and saved a lap there. The whole point is to finish, get a good result for Acura and Honda, and get some points for the NAEC.  It was fun, but it’s a bummer because when we have that kind of pace this far in the race and were on the lead lap, we’d be fighting for the top-five. It’s good and bad. But I’m already looking forward to Sebring. These guys are learning so much so quickly, and now they know more about how to do a race and compete in IMSA, so we should be on a better foot when we get to Sebring.” 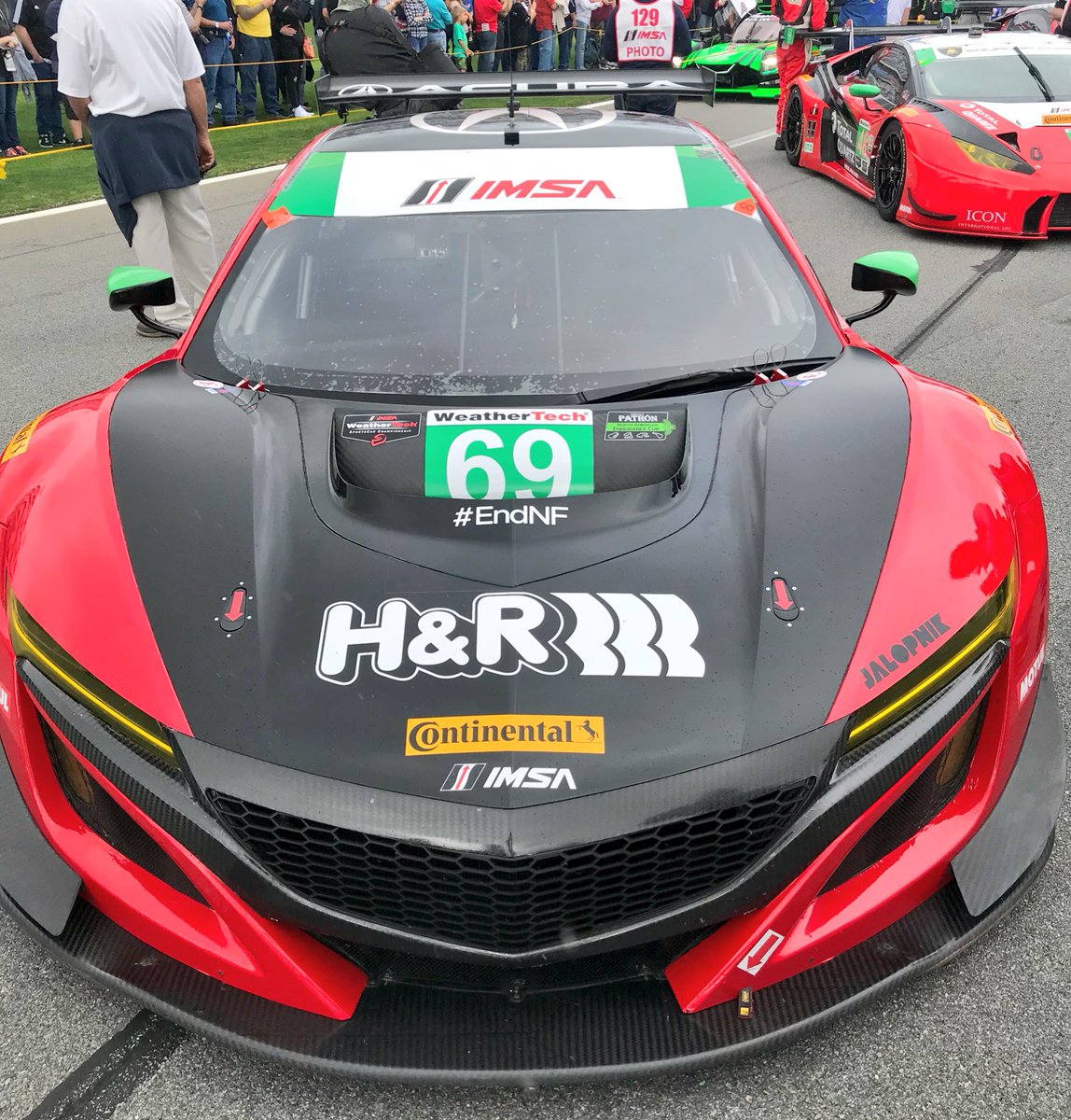 The tired HART team members will get a little bit of a rest, and report back to work this week as they already start thinking about Sebring in just over a months time.