RACE: Round 6 of the IMSA WeatherTech SportsCar Championship

TRACK: At 3.4-miles, the 11-turn natural road course is a driver favorite and a historic one among sports car enthusiasts.

AMERICA THE BEAUTIFUL: Both Michael Shank Racing Acura NSX GT3s have a new look at the Glen in celebration of the Fourth of July holiday. Each features a new red, white, and blue color scheme that incorporates much of the same design accents of the original Michael Shank Racing full-season livery.

Created by Acura’s Global Design Chief Dave Marek, the No. 86 Acura NSX GT3 of Jeff Segal and Ozz Negri features artwork of Uncle Sam while the No. 93 Acura NSX GT3 of Katherine Legge and Andy Lally features artwork of the Statue of Liberty. The wrap was applied utilizing AERO™ Advanced Paint Technology, a partner of Michael Shank Racing that has provided many stunning liveries for the team since 2013. 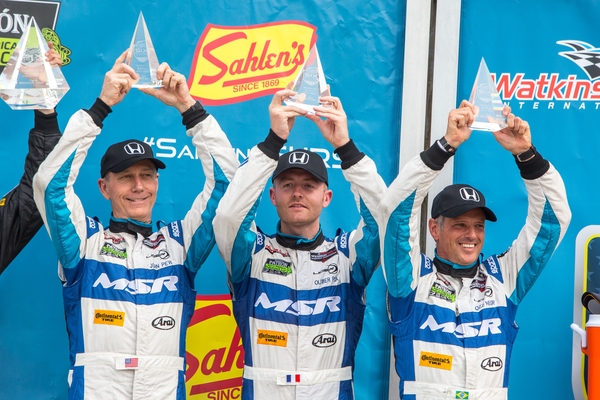 A LOOK AT MSR 6 HOUR HISTORY: After having finished fourth in the 6 Hour six times, Michael Shank Racing broke through for a podium finish of third in last year’s race in the Honda-Ligier P2 with John Pew, Ozz Negri, and Olivier Pla.

Ozz Negri: Ozz Negri has made 12 starts in the Sahlen’s 6 Hours of the Glen with a best finish of third last year while driving the Honda-Ligier P2. This year’s 6 Hour marks Negri’s first GTD race at the track. He has scored two podiums on the Watkins Glen sprint course layout (2004 – 2nd, 2005 – 3rd).

Jeff Segal: Jeff Segal has made 10 starts in the Sahlen’s 6 Hours of the Glen with two wins and four podiums. He is the defending GTD class winner having won in the event last year. The Sahlen's 6 Hour was where Segal scored his first-ever professional GT pole and win in 2008. It is also the first track he ever drove.

Katherine Legge:  Katherine Legge has made three starts in the Sahlen’s 6 Hours of the Glen – each while driving the DeltaWing from 2014-2016.

DETROIT REWIND: Racing with the brand-new Acura NSX GT3 in just the team’s fifth GTD-class event, Michael Shank Racing with Curb/Agajanian broke through for victory as drivers Andy Lally and Katherine Legge combined to win the Detroit Grand Prix. Further bolstering Michael Shank Racing’s win, was the fifth place finish of the sister No. 86 Acura NSX GT3 which ran in podium contention all the way up until the final two laps. 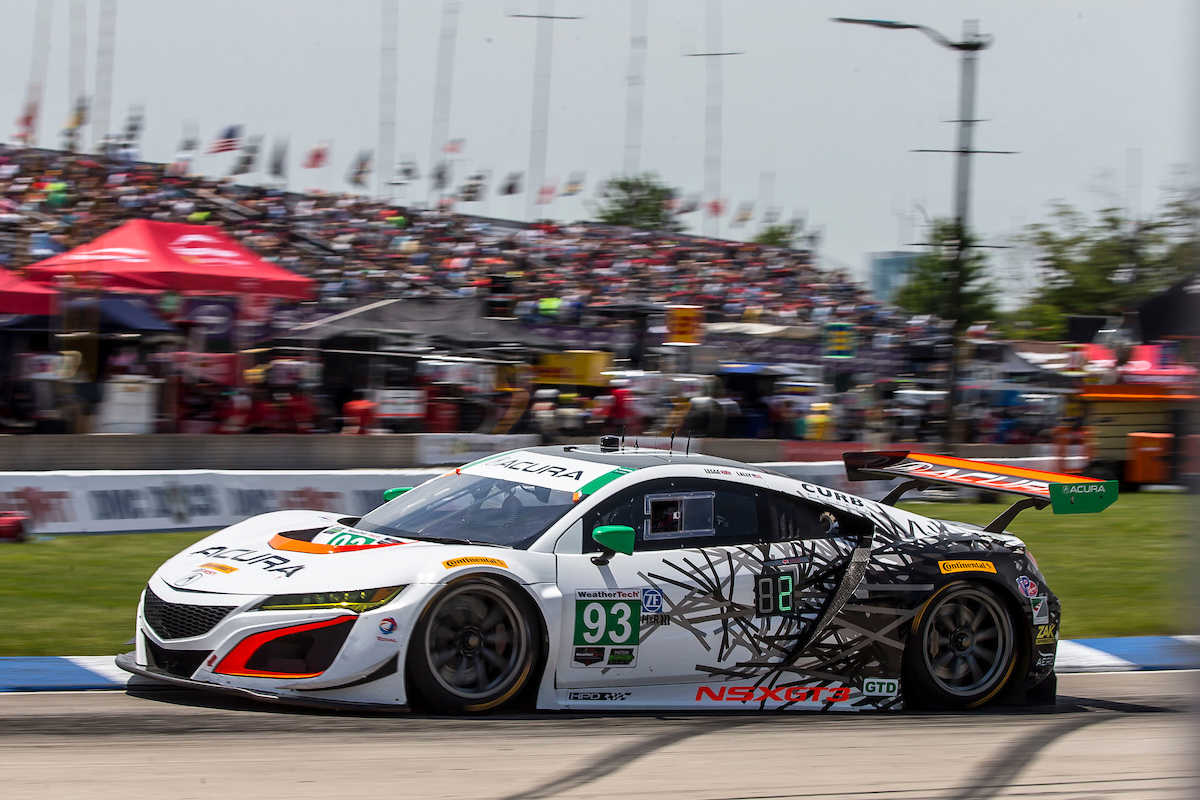 MIKE SHANK ON RACING AT THE GLEN: “We are super excited about racing at the 6 Hours of the Glen. If you look at how we progressed from Sebring to Watkins Glen, we’ve made a lot of gains in the car. I think we can be pretty competitive there. We have a lot of history there – we know how the races go. Even though it was in Prototype, we can still use the history of the classes to help us with strategy hopefully and just make good calls all day long. All of our drivers are very well versed there and know the track really well.”

NEW YORK STATE OF MIND: A native to Long Island, Andy Lally calls New York home so it’s fitting that the New York native will have a paint scheme of the Statue of Liberty on his No. 93 Acura NSX GT3 at the Glen. Prior to the Glen, Andy talked about how much he loves the village of Watkins Glen:

“The camping is cool and the facility is cool. On top of all that, a mile and a half away is the main street of Watkins Glen which has the coolest little village – great restaurants, cool little bars, and the neatest gorge in the world to ever hike up. It’s literally a destination where you’d love to get there two days early or stay two days late. I visit the Farm Sanctuary which is only seven miles away from the track. If it didn’t snow so much, I’d buy a house there!”

NEW FOR 2017: In addition to the brand new cars and drivers in the Michael Shank Racing stable, the team has also added seven additional team members for the two car-effort. New for 2017 is Michael Shank Racing General Manager Tim Keene, who spent time in a management role at DeltaWing Racing and Chip Ganassi Racing.

MICHAEL SHANK RACING MERCHANDISE: Reacting to robust fan demand and reflecting the new on-track program, Michael Shank Racing has partnered with Styled Aesthetic, a full service apparel and graphic design company, to produce a variety of new items. A range of t-shirts, fleece tops, and hats with various designs will be available with shirt sizes including Men S-3XL, Women XS-2XL, and Kid 2T-Youth L. Merchandise will be available at Watkins Glen in the Vendor area.

Ozz Negri, No. 86 Acura NSX GT3: “I’m really looking forward to the Six Hours of the Glen. We improved the car quite a bit. We had two very successful days of testing at VIR since Detroit. Watkins Glen is definitely my favorite track. It should suit our Michael Shank Racing Acura NSX GT3 a little better because it is mega smooth. It will be just our third race on a permanent race track this year and we learned a lot at the first one, Circuit of the Americas. Watkins Glen is always at the top of my list of favorites. I like the track, I like the village, I just like everything about it so I really can’t wait to get there.”

Jeff Segal, No. 86 Acura NSX GT3: “I love the Glen. That was the first racetrack that I ever went around so that’s about as home track as it’s going to get for me. It’s fast, it’s flowing, it’s exciting and the racing is always great. I had my first professional GT win and pole there (in 2008) so it’s a place that has some good memories for me. I am cautiously optimistic because we’ve been getting strong and stronger. The team won at Detroit which was a great boost for all of our confidence. But the Glen could not be more different than Detroit in terms of layout, speed, smoothness. But we’ll tackle it.”

Katherine Legge, No. 93 Acura NSX GT3: “Watkins Glen is always one of the best races that we go to. It is such a storied track and is in a beautiful area. The track in my opinion is one of the top three in the world. Now that they’ve repaved it – it has so much grip, it’s insane. The 6 Hour is always a really good race. I’ve never done it in a GT car so I’m really looking forward to that. I know Andy (Lally, co-driver) has done it a bunch in a GT car so I’m lucky that I have that experience to pull from.”

Andy Lally, No. 93 Acura NSX GT3: “The Glen is my favorite track on the planet and has been the place of some of my best and most cherished racing memories. The track is fast, wide and smooth and has great elevation changes and no hairpins to slow down the action. I’ve been fortunate to have a lot of success at this track in years past with three wins at the 6 hour and wins in additional sports car and open wheel classes. This was also the site of my first NASCAR Monster Energy Cup start where I qualified 15th and had a wild day. It was also the place of my first top-10 finish in NASCAR. Rain or shine this is the most exciting track to race.”