The races—four hours of competition for the MPC runners and a grueling 24 hours for the WeatherTech event, were wildly different.

Friday’s MPC event was staged in ideal cool but sunny conditions,  while the Rolex 24 featured treacherous wind and precipitation that  drew multiple  caution periods, red flags, and culminated with the checkered flag flying before the scheduled 24 hour mark.

But one thing was exactly the same in both events, as the cars that fought to the front for the chance to roll into Daytona’s Victory Lane both featured AERO Sustainable Paint Technology.

The first-ever race in the new era IMPC championship saw the AERO-liveried No. 75 Compass Racing McLaren piloted by Paul Holton and Kuno Wittmer blister the field as Holton claimed a new track record to capture the pole in Thursday’s qualifying session.

Drivers have often said that any fast car is a good looking one, and the McLaren GT4 was no exception as  the bespoke livery delivered an incredible visual with the storm grey and custom Compass orange looking as good as the car performed.

The race showed that qualifying was no one-lap wonder as Holton and Wittmer had the car out front for the majority of the opening two hours.  But a drive through penalty for jumping the start saw them rejoin the field 29th but then use that strong race pace to stage a massive comeback to win the  BMW Endurance Challenge. Wittmer claimed the lead with just 7 laps to go and held on to take a huge win.

“The car was really, really good,” said Holton. “The boys did a really good setup mechanically on the car. The car was the easiest thing I've ever driven. The racing out there was extra tough. Really good, respectful racing, hard racing. Was some of the most fun I've had in a race car in a long time.” 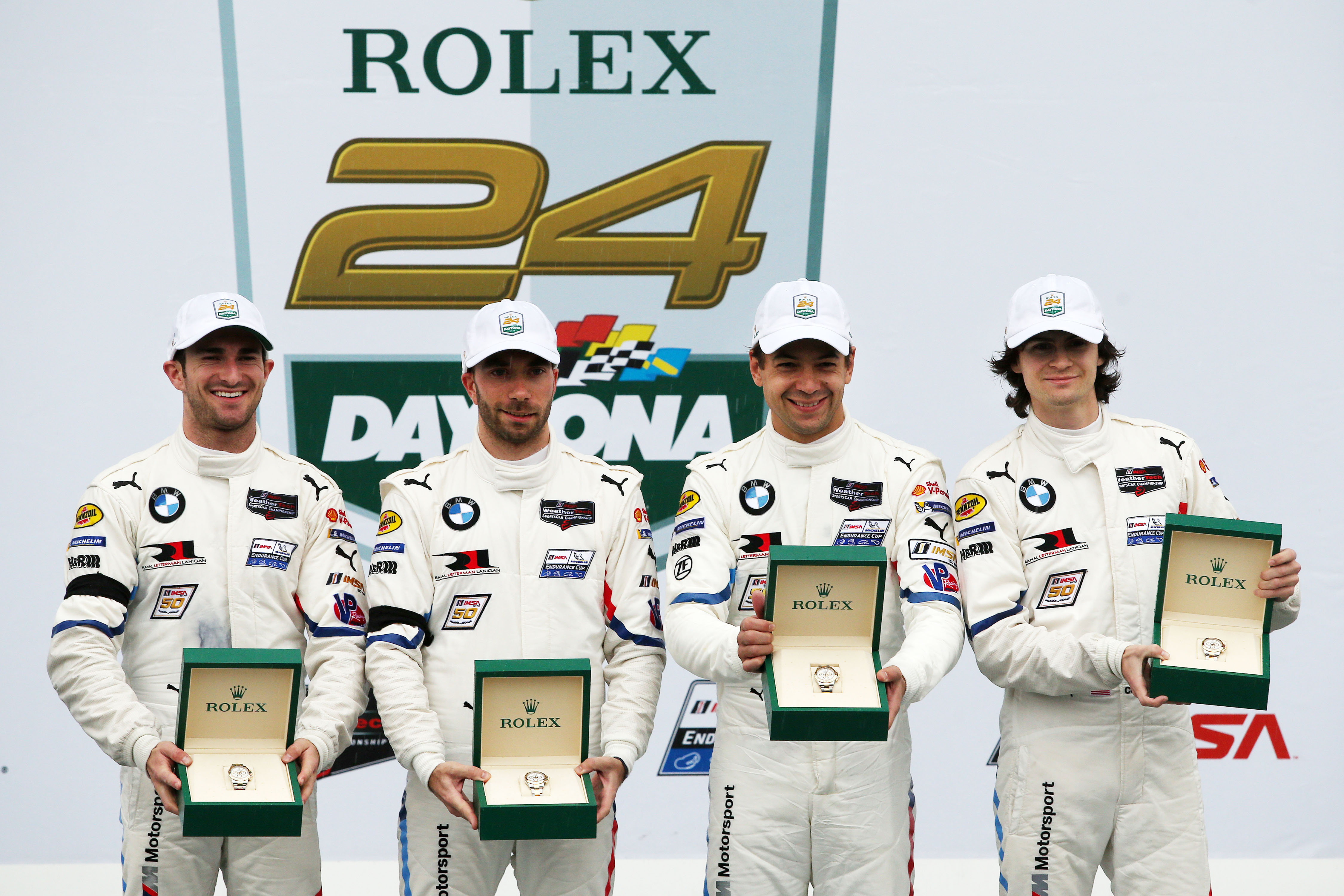 “I think the biggest thing for us was seeing how well the car performed on Michelin tires,” said Wittmer. “Everything worked perfectly well. There were no issues and no blistering, no flats, none of that. It was very comforting. We’ve got lot of confidence in the car going forward.”

Fellow AERO runners Carbahn/Peregrine Racing Audi R8 led the race with just over ten laps to go, but were forced to pit for fuel and cede their advantage. It was also a fuel issue for fan-favorite HART racing in TCR competition, as the team reported after the race weekend that it had been delivered the wrong type of fuel at Daytona so was down on power during the race.

The race weekend was just starting as the green flag flew for the Rolex 24 hour on Saturday. The field was packed with entries putting the AERO Sustainable Paint Technology advantage to work as IMSA launched the 50th Anniversary season. 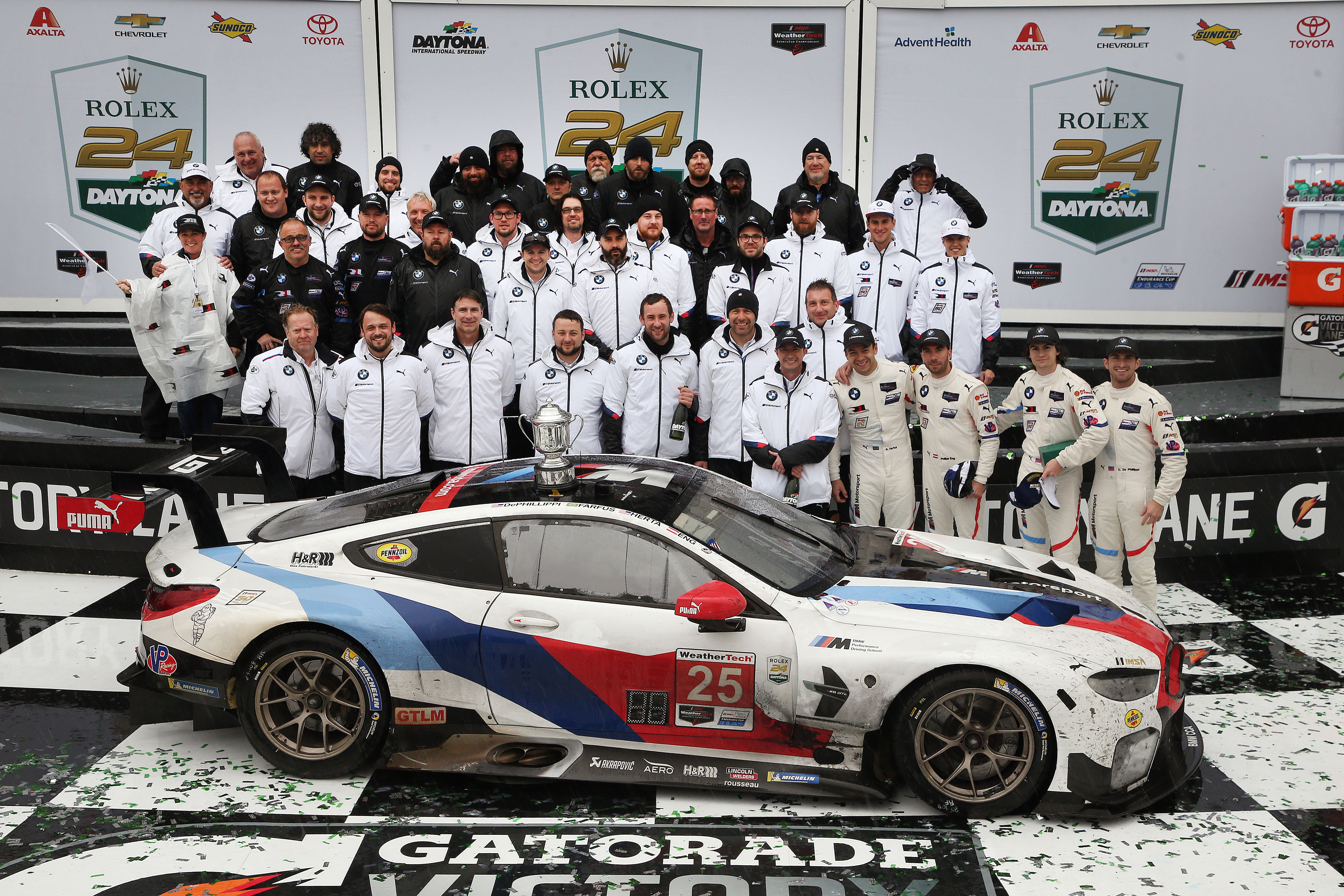 While it was the BMW Team RLL No. 24 BMW M8 GTE with legend Alex Zanardi that caught most of the pre-race headlines, an electronics issue cost that car time in the pits early in the race.

Instead it was the sister No. 25 entry of Connor De Philippe, Rolex 24 debutant  Colton Herta, Philip Eng and Augusto Farfus who claimed new Rolex Chronograph hardware with a run to victory lane in the Bobby Rahal-run BMW M8 GTE.

“I’m super excited to get this win under my belt,” said Herta, who will move up to IndyCar competition in 2019. “I’ve watched this race for so long, and really to win the race in my first attempt is just spectacular. It looked fast, and felt fast and if you don’t have a good livery you won’t be looking good! Having a good car is half the battle, and I think we had that today.” 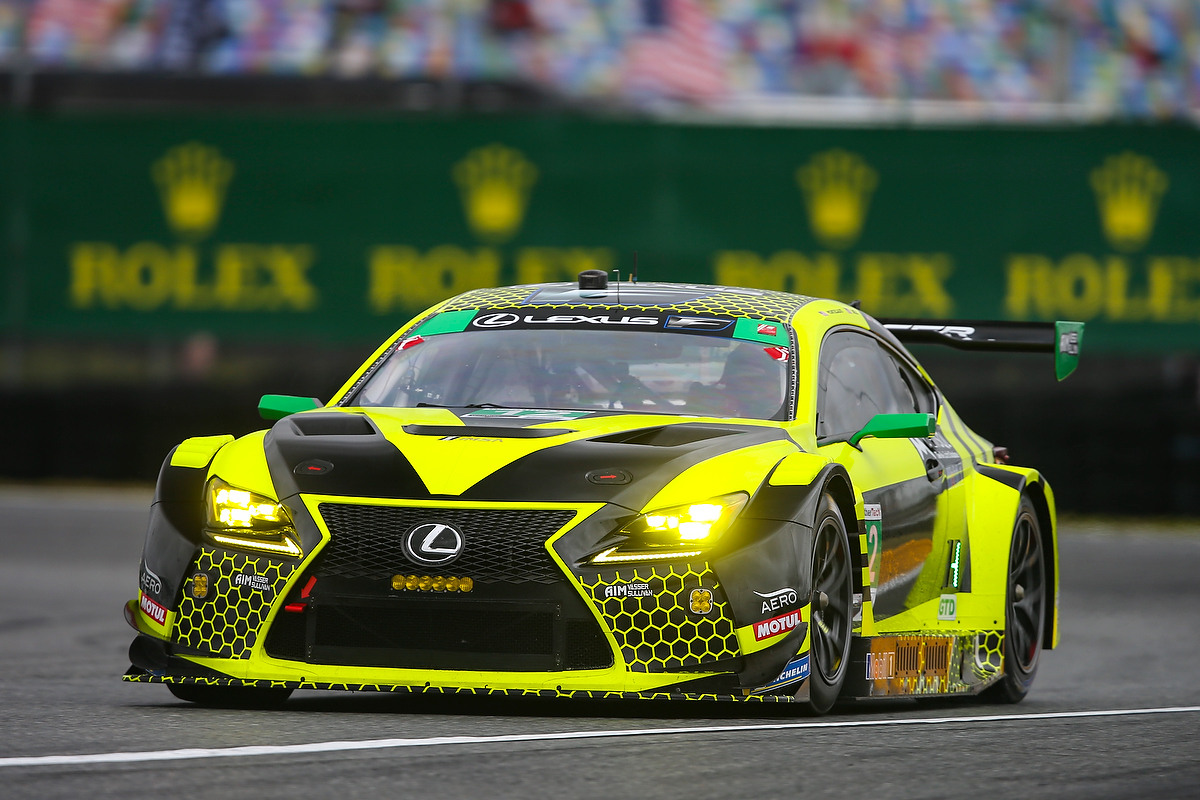 Also on hand for the soggy post-race podium ceremonies were the all-American drivers in the No. 12 Lexus as the brand-new team came home third in the GT-Daytona class with drivers Townsend Bell, Frankie Montecalvo, Jeff Segal and Aaron Telitz.

“This was truly a team effort,” said Segal. “We had some knocks earlier in the race. Really, it was just bad luck. Nothing other than that. Needing to refuel the car when the yellow came out at just the wrong time and we ended up losing a lap and it went from there and spiraled into two laps. But, everybody put their head down and nobody gave up.  On the restarts they took a lot of big chances and had no idea we would be red flagged here. So, I’m very happy that we were in that position but I think the car was really fast and it was really working well in those conditions. A big credit to this team to get two cars home in top positions like this on the first time out.”