< prev
next >
Winning Results for AERO Heading into Long Beach

European Lemans, Michelin Cup, Indycar, and IMSA all in action this weekend

LONG BEACH, California (April 10, 2019) - With the 2019 NTT IndyCar season in full swing, AERO Sustainable Paint Technology teams are working in full force as the series makes the  quick turnaround from Alabama’s Barber Motorsports Park out to California for the Acura Grand Prix of Long Beach this weekend. The event weekend will also see Round 3 of IMSA WeatherTech SportsCar Championship competition.

On the other side of the timezone map at the Circuit Paul Ricard in Le Castellet,  France, both the European Le Mans Series as well as the Michelin Cup will both be staging their opening races of the 2019 season. 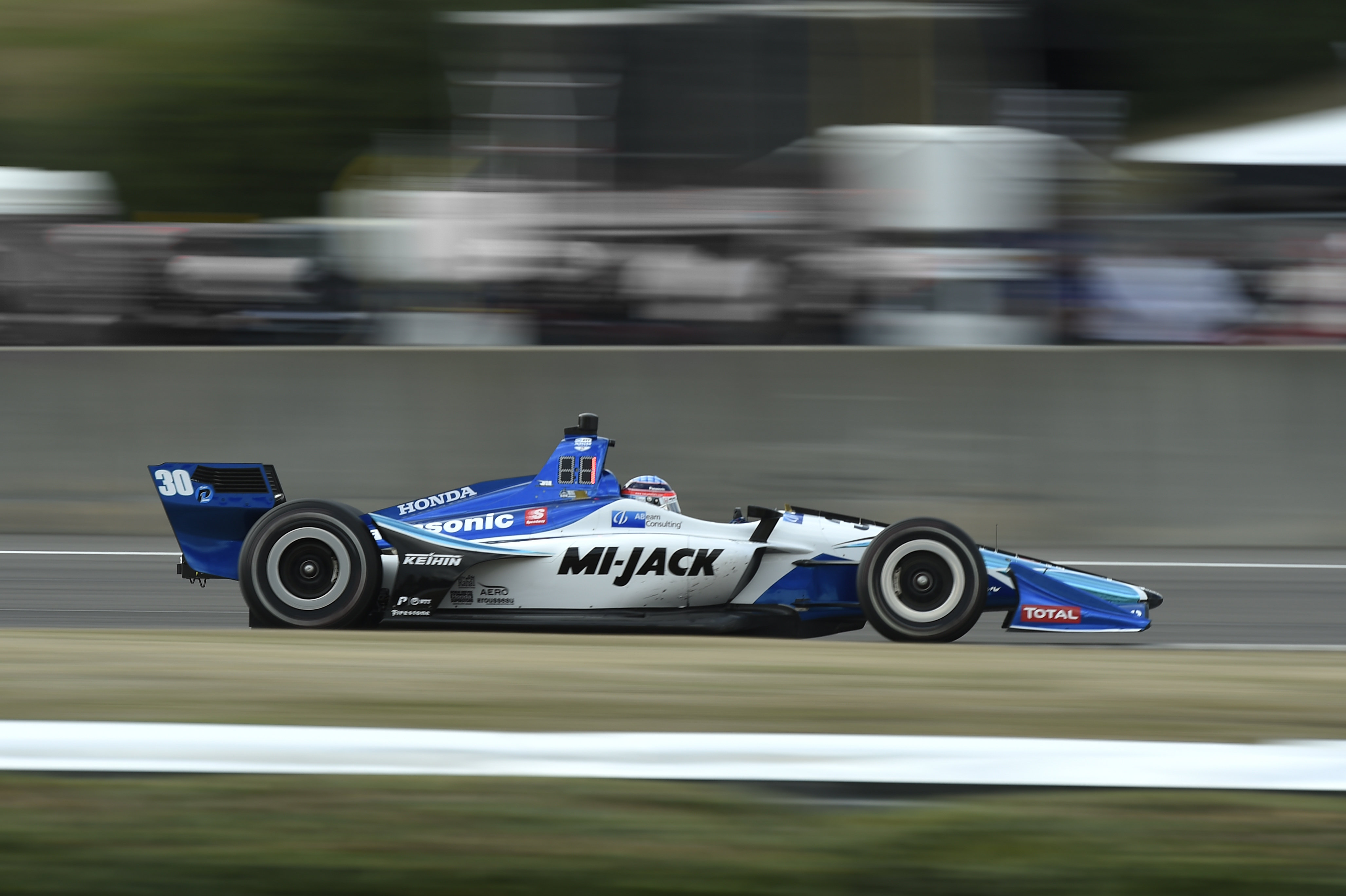 It was a front row sweep for AERO at the Honda Indy Grand Prix of Alabama last weekend as the Rahal Letterman Lanigan (RLL) team monopolized the front row for the 90-lap event. But there can only be one winner, and it was Takuma Sato who brought his No. 30 Mi-Jack / Panasonic car to victory lane on Sunday.

Unfortunately his RLL teammate, Graham Rahal didn’t make the finish of the race after a mechanical issue left him stranded on course as he looks for a reboot at Long Beach with the No. 15 One Cure machine.

Meyer Shank Racing was another promising representative of AERO Paint during the Barber weekend. The custom pink color, which was designed as part of AutoNation’s Drive Prink campaign, showed well in qualifying before a pit lane speed infraction cost the squad key track position on the way to a 13th place result.

The A.J. Foyt Racing pair of Tony Kanaan and Matheus Leist were targeting a stronger result than what the 18th and 20th place finishes showed. Kanaan, who was on a bold strategy that was shooting for a top-12 unfortunately had to make a late race pit stop for a splash of fuel as the race went green for nearly 85 laps.

Right back into NTT IndyCar action this weekend, the series and teams have made the trip directly to the Acura Grand Prix of Long Beach. The event which typically brings in large crowds will have a sight to see as these AERO liveries stand out in the car-crazed SoCal scene. 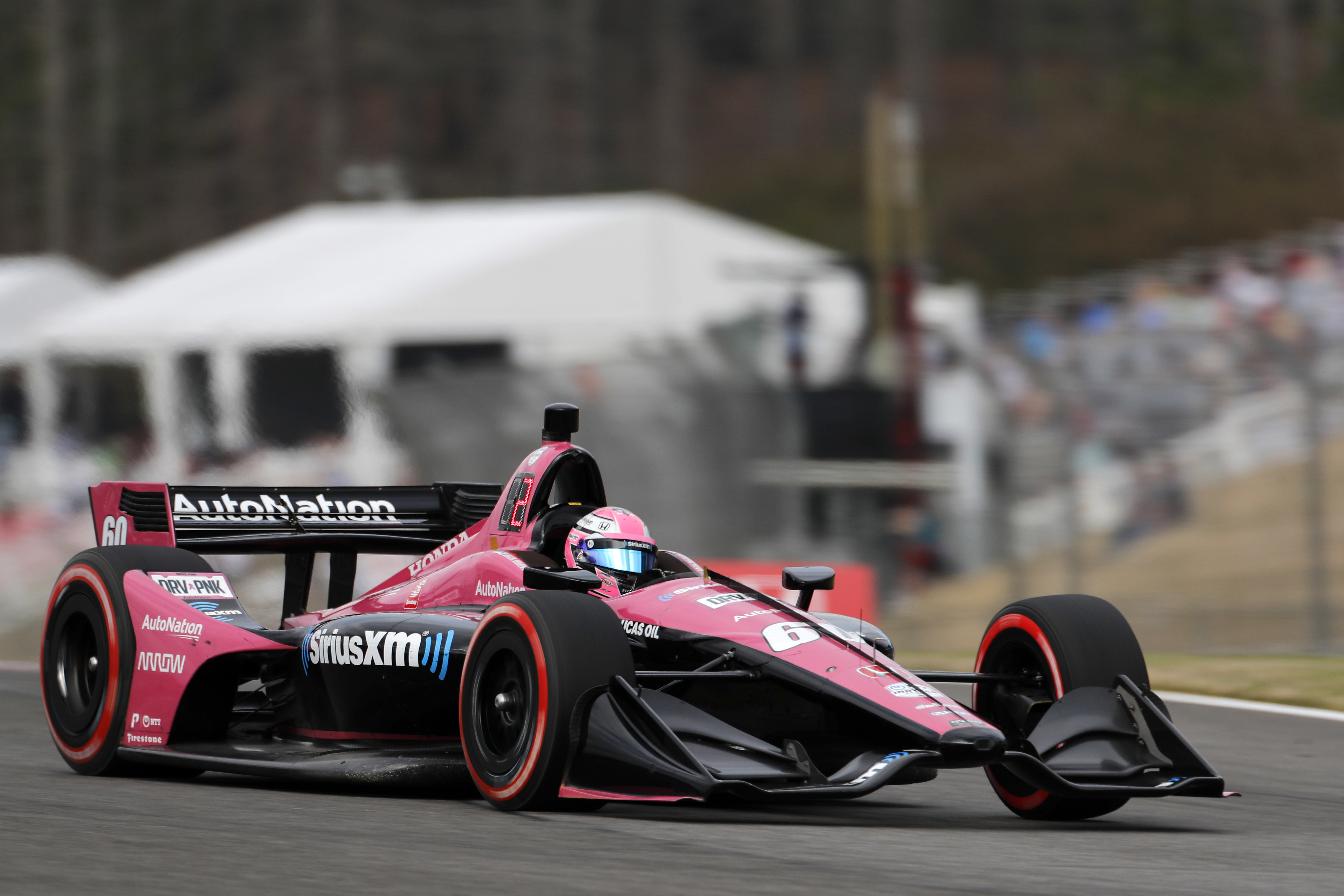 Several AutoNation representatives and dealers will be present for the highly anticipated Long Beach weekend to see the pink No. 60 Meyer Shank Racing AERO livery at speed on the 1.968-mile concrete-lined street circuit. As part of the event weekend, the team will feature Acura branding throughout its design in partnership with Acura’s title sponsorship of the event weekend.

“It’s great to see Acura upping its presence in the motorsports community,” said MSR Team Owner Mike Shank. “We’re on our third year with Acura in IMSA and to be able to cross over that relationship into IndyCar is pretty cool. We’re definitely feeling more confident heading into this year’s event. Jack is moving in the direction that we set for this season, so we’re hoping to continue that this weekend.”

It will be a busy weekend for RLL as both its IndyCar and IMSA WeatherTech SportsCar Championship entries will be participating in this weekend’s event. The team has scored four total wins, including the Rolex 24 Hours at Daytona, between the two series.

“There are no second chances at Long Beach,” said Oliver Gavin, winner of the 2017 and 2018 Long Beach events. “We were strong and Tommy (Milner) had a great stint at the end. Sure, we got fortunate when two other cars had contact but that’s one of the reasons we’ve won so many times at Long Beach. All it takes is a little bit of contact or a brush with the wall and your day is done.”

As the IMSA and IndyCar racers will soak in the California sunshine, the European championships will have to endure a stay in the south of France as the season opens with testing and then the first race of the season at the Circuit Paul Ricard in rural France.

It was an encouraging start to the year in testing for the No. 22 AERO United Autosports Ligier of Matt Bell and Jim McGuire, who opened the event atop the timing sheets with a best lap time of 1:51.575-seconds to lead the second session of the opening day of Practice. The race, a two hour sprint around the 3.6- mile circuit, will be staged on Saturday night ahead of Sunday’s European Le Lans opener.

The performance was not surprising from those who have followed the fortunes of the powerhouse United Autosports squad, which sees the AERO-liveried team return to LMP2 competition with  Phil Hanson and Filipe Albuquerque in the No. 22 Ligier JSP217 (though it will be former F1 driver and DTM champion Paul Di Resta at Ricard) and then Alex Brundle racing alongside Ryan Cullen in the No. 32 Ligier JS P217.

Garett Grist and Wayne Boyd  return to the team to drive the No. 2 Ligier JS P3, with the No. 3 LMP3 entry being wheeled by Mike Guasch and Christian England.

United’s 2019 Michelin Le Mans Cup team is once again made up of three Ligier JS P3s. Garett Grist share a Michelin Cup LMP2 with his American IMSA co-driver Rob Hodes in the No. 23, while Naj Husain and Colin Braun return for a second year while McGuire and Bell return for their third season in the #22 AERO Ligier.

“I’m really glad to be returning to the Michelin Le Mans Cup this year,” said McGuire. “United Autosports did a great job for Matt, Kay, and I keeping our AERO-painted Ligier JS P3 on top during the Asian Le Mans Series. And last year we had a lot of fun in Europe with the team. Every race the crew does a great job getting the car ready for us. I think we’ve got a really competitive package, and I’m happy for the chance to race with United Autosports again this year.”

IMSA’s BUBBA Burger Sports Car Grand Prix will go green on Saturday, April, 13th at 5:00pm ET and will be followed by IndyCar Qualifying, both live on NBCSN. The Acura Grand Prix of Long Beach will be held on Sunday, April 14th at 4:30 PM ET on NBCSN.